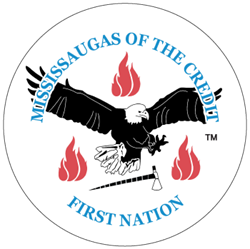 Oakville Public Library is situated on Treaty #14 and Treaty #22 lands and territory of the Mississaugas of the Credit First Nation and the traditional territory of the Huron-Wendat and the Haudenosaunee. Oakville is currently home to many different First Nations, Inuit and Métis peoples.

Regardless of where we come from, we are all interconnected through the land that we live on, water that we use and air that we breathe.

We are committed to a continuous learning journey in allyship. We seek to elevate Indigenous voices and lived experience to cultivate reconciliation in Oakville.

Mother bear is the medicine teacher and her role is to help her little ones learn how to climb. The bear: Makwa is the closest relative to the Anishnabek (as in, the two-leggeds).

The mural represents humans who gather to learn at the library through the medicine of the trees, and plants  who are our original teachers. In the mural, the birch, or Wiigwaas, is the featured medicine tree that the Bears are gathered around. Specifically known as the paper birch, this represents the sacred teachings that come from the medicine of this tree, and their connection to literacy. The Wiigwaas tree gave the Anishinaabe people many gifts for all their needs on this land such as its paperbark to write on and create the sacred scrolls, as well as the creation of the birch bark biting artwork! The Anishinabe also made birch bark into water-resistant carry pails for maple syrup and food storage containers.

The birch bark was also used to build homes called Wigwams, as well as canoes to navigate the water systems allowing for fishing, collecting of mamoonin (wild rice which grows on the water), and travel through the trading routes. The Wiigwaas carries a medicine called Chaga that forms like a fungus on its fallen branches, which can be made into a tea and is extremely high in antioxidants that help purify our blood. Much like the sugar maple tree Ininaatig that you can see above the waterfall’s cave, the birch tree can also be tapped for its syrup in the early spring. The Chaga and the birch bark are also excellent fire starter materials. Additionally, a Shagbark hickory, Mitigwaabaak on the far left of the mural, is easily recognized by its shaggy bark. The white spirit bear is sacred to the Anishnabek and reminds us that every being has a gift that we can share with the community, no matter how different. We all have a place in the circle.

The Red Tailed Hawk: Gegek flying high above the land, is one of the messengers to Great Spirit, Gitchi  Manitou. Hawk will appear to tell you you’re headed the right way. Below is the weeping willow, close to the  water where willows grow best. The plant imagery is specifically selected as teachings that are part of Treaty 22
and endemic to the river and environment of 16 Mile Creek and the land that Oakville, including Oakville Public Library, reside on. This is the territory of Mississaugas of the Credit First Nation Treaty 22.

OPL had the pleasure of interviewing Cody Jamieson, an Indigenous professional lacrosse player of the Halifax Thunderbirds who hails from Six Nations, Ontario. Hear from Cody as he shares his journey and experience as an Indigenous athlete and mentor in his community, in conversation with OPL staff members Tania and Eric. You can learn more about Cody Jamieson at https://www.halifaxthunderbirds.com/p.... Thank you to the Halton Youth Initiative – Our Kids Network, for calling on OPL to answer the Truth and Reconciliation Commission, Call to Action #87: We call upon all levels of government, in collaboration with Aboriginal peoples, sports halls of fame, and other relevant organizations, to provide public education that tells the national story of Aboriginal athletes in history. View the interview on our YouTube channel

National Day for Truth and Reconciliation